ManifestiV founded as an experimental industrial duo in Vallejo, California early 2014 by two morticians that met years prior in Dallas, Texas. Paragraph, guitarist & programmer, joined forces with Lillith, vibraphonist & visual artist. They used their instruments in new ways, scoring the imminent end of human civilization with downtuned guitars & electronic vibraphone hand-built by Lillith, aiming to guide humanity off Earth to explore & build other worlds while possible.

After a live debut at SXSW that same year, Einer Sie Gern, ManifestiV's self-made debut LP recorded in their Vallejo home, spurred extensive DIY touring after its San Francisco release at the tail end of 2014. For years to follow, the duo only stopped US tours for Burning Man & travels to Southeast Asia, Central America & Europe before recording God is a Martian with Nate Nauseda at Prairie Sun in Cotati, California. The EP was mixed after OctouR (spanning 7 months / 45 shows) by CJ Bills near Austin & released late 2018 back in Dallas at Curtain Club, months before it closed.

ManifestiV based in Dallas for 2019, back full circle where they had met on the same decade's other side. After releasing the GiaM counterpart 3vE in the Spring, the band spent summer expanding live personnel with a stellar rhythm section, dear friends borrowed from fellow Dallas band Secret Of Boris, ¶'s other industrial & more hard rock act: bassist / longtime co-¶ axe-man Kevin Porter, and drummer / producer Ryan A.

The newly modular quad format of ManifestiV makes each performance even more of a wild card than the last. The band experimented with modular personnel configurations & testing new material performing throughout Texas at the turn of the decade. Writing & releasing Horsemen at the band's east Texas farm early 2021, the band performed shows with varying member amounts (between duo, trio and quad) behind it while collaborating with Lcn1 on writing a new album for release on GIVE/TAKE directly thereafter. 2022 saw the release firstly of remixes from the new Lcn1 collab, but past albums as well, on The Bitter Truth out on Earth Day. After their native duo's midsummer swoop of their native California with Seattle darkwave artist Nuda, Paragraph & Lillith (surrounding a return to Burning Man) wrapped the new album with the boys for its 2/3/23 release on GIVE/TAKE.

Legacy (out in the dead of early 2023's winter) soundtracks an empty future humanity leaves behind by sticking to its current course of neglecting connection nature surrounding it. Between regional Texas and California tours in Spring & Summer respectively, the band show no signs of slowing down creating and writing at the farm and remotely with each other, even as the apocalypse forecasted closes in around them. 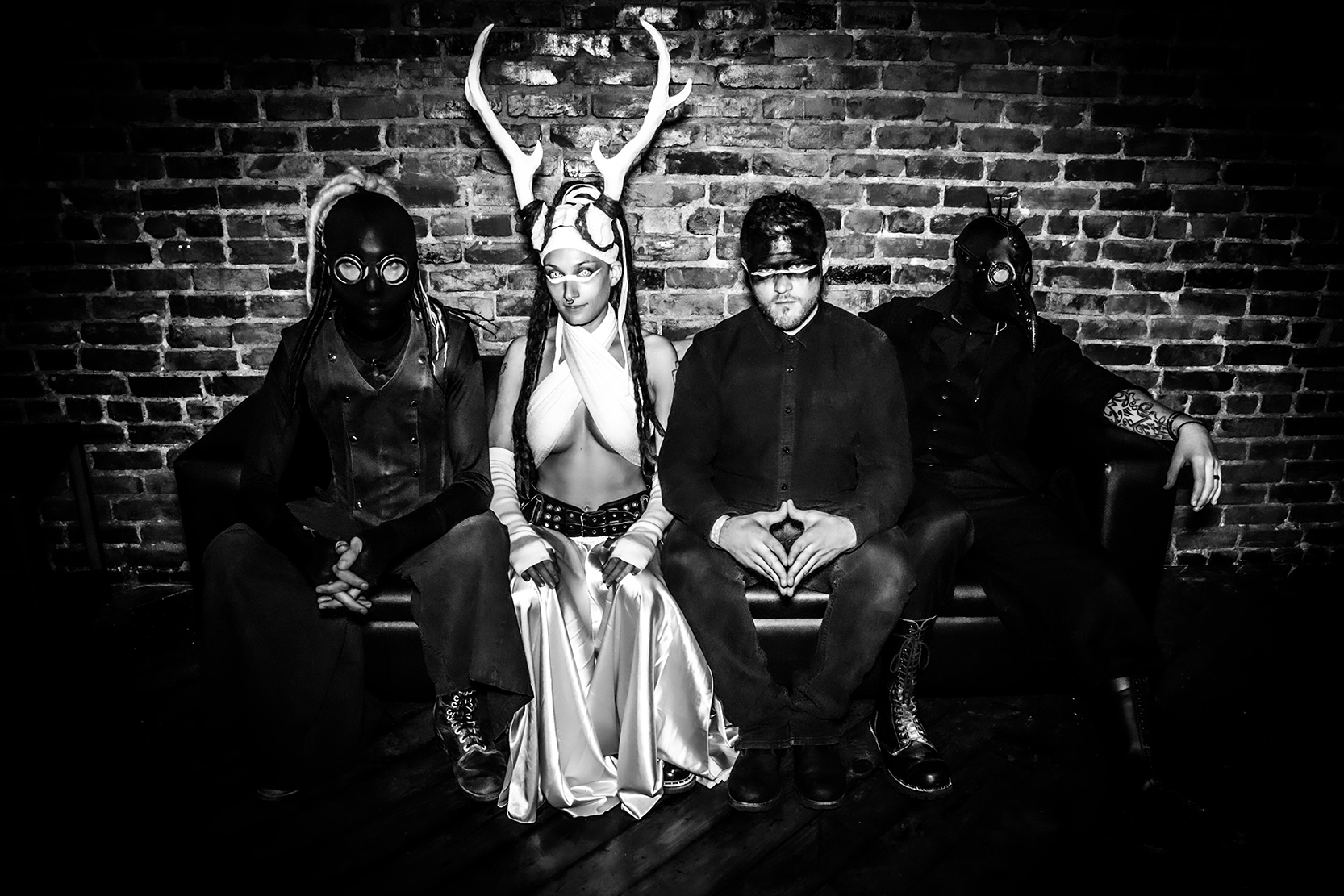 “When the rhythms slow down, the menace increases.”
c. pollard - ReGen Magazine

“The ManifestiV Traction mix of [fellow GIVE/TAKE artist EbE404’s] “Slipping by One” expands a chugging guitar part and brings in [vibraphones AND] saxophones, turning the song into a neo-noir soundtrack.”
Justin Roby - ReGen Magazine

"..their rhythmic distorted sounds paired with vibraphone along with their stage costumes is something to be experienced. ...they had a presence along with a look which was different and unique but relatable."
Bryan Bardes - Audio Vein Entertainment

"they do have a unique sound: space-faring metal"
Steven Gullotta - Brutal Resonance Webzine

"There’s... a darker side to Dallas’ performance scene, one that post-industrial band ManifestiV has grabbed by the horns."
Erin Shea Devany - Dallas Observer (Dallas TX)

"Vocals and guitar crunch from Paragraph contrast with the ring of Lillith's vibraphone [& voice] in a relaxing way."
Juan Cornejo - Project Zer0 (Ft Worth TX)

"God is a Martian perfectly balances heavy grooves, guitar riffs and [vibes]/synth with smooth warm vocals... you would swear this was a 5-piece band at times. The title track closes out the EP with all the boxes checked as ManifestiV brings you home from their journey far, far away."
Bradley Amos - Deep Dallas Radio (Dallas TX)

"Heavy distorted guitars chugging under the unique sound of a vibraphone with the electric undercurrent works so well, and every sound is crisp & focused, that it’s easy to get pulled into their mysterious world."
Rob Bozzoli - Halfway Serious (Santa Cruz CA)

"Paragraph let loose... darting about the stage, thrashing around to the heavier parts of the tracks and even taking a mighty leap into the air at one point, all while shredding on his guitar. They have a strong industrial quality about their music, which often leaned towards more rock tendencies; though there were some nice slower, even melodic jams mixed in. The more experimental side of things came from Lillith, who played the vibraphone, which added a great touch to the songs; her luminous eyes visible from even far away, as they looked as if they were piercing through everyone watching."
Jordan Buford - The Music Enthusiast (Dallas TX)

"...the pair have made an album which is both hard-hitting and addictive... powerful and anarchic but also blends in enough pop sensibility to make them appealing... wanders effortlessly over an industrial ambient soundscape which lends itself as much to originality as it does to bravado."
Paul Scott-Bates - Louder Than War (Manchester UK)

"ManifestiV undoubtedly feeds off each other’s artistic talents. What caught my attention were the subtle movements Lillith does in between and during her harmonies, using her instrument as a canvas for so much more than a soundscape. To her left in sync, Paragraph magnetizes the set with his body, vocals, and piercing guitar."
Jessica Navarro - Rooftop Playlist (Austin TX)

"This is what music is gonna be in a post-apocalyptic world... I would call it experimental, but I would say these guys don't act like they're experimenting with anything. They've got it down to a science."
Matthew Blake - Whiskey Boy Radio (Dallas TX)

"If a heart can be naked and survive, this is the sound it would make."
TJ Walkup - Omnific Pictures (Vallejo CA)